We are aware of issues users have been reporting regarding this wallet software that was available in the iOS App Store and Google Play and their inability to access any funds they had stored in it, transactions they had no knowledge of, and a general concern for the recoverability of their funds. We wanted to take a quick moment to clear the air from the project’s perspective and dispell and doubts or concerns regarding attempts to resolve the reported issues.

First and foremost, TRTL Wallet (iOS & Android) relied upon the Miniwallet web service which was a custodial wallet designed by, written by, maintained, and operated by a former core developer ExtraHash who has long since left the project. Being a custodial wallet, there were numerous reminders in the applications/service to remind users that it was, indeed, custodial and that the service (and thus its operator) had access to user’s keys.

While the application/service was easy to use, users entrusted the service to maintain those keys and provide them with a reasonable sense of security.

However, as we’ve said thousands of times, not your keys, not your funds.

With the final release of the v1 software, we received notice just before Christmas 2021 from ExtraHash in discord that he was planning to shut down the Miniwallet service, including the iOS and Android application(s) on Jan 31st, 2022. The below announcement was posted in discord with everyone tagged (you can still find it in #announcements-old). We’ve had no further direct communication with ExtraHash after he asked us to let everyone know he was shutting down the service/applications. 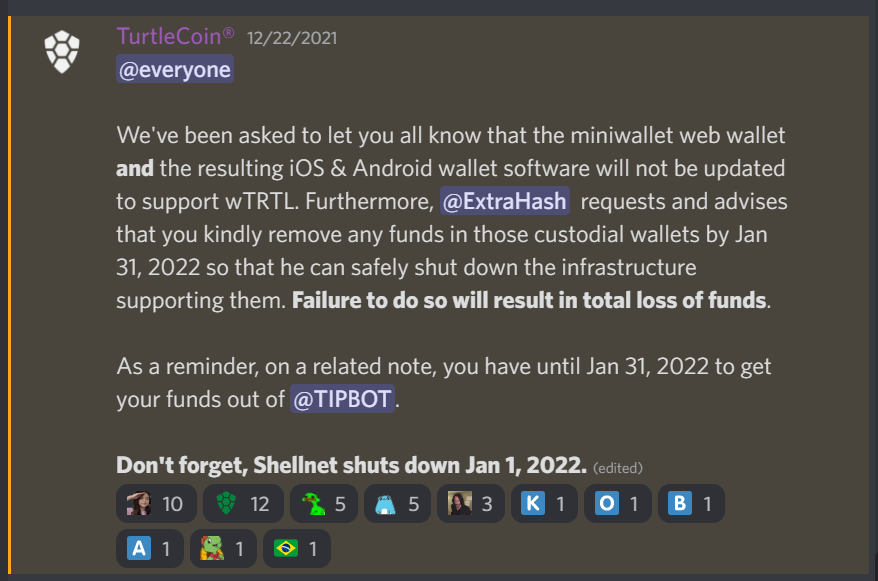 As you can see from the above, ExtraHash was not the only service discontuing their services as both Shellnet (former custodial web wallet) and the old TIPBOT (also a custodial wallet) had announced similar shutdowns.

In any event, Extra provided over 40 days notice to users to withdraw their funds as the service would be terminating Jan 31st, 2022.

A reminder was also given on Jan 2nd, 2022 that it was shutting down. 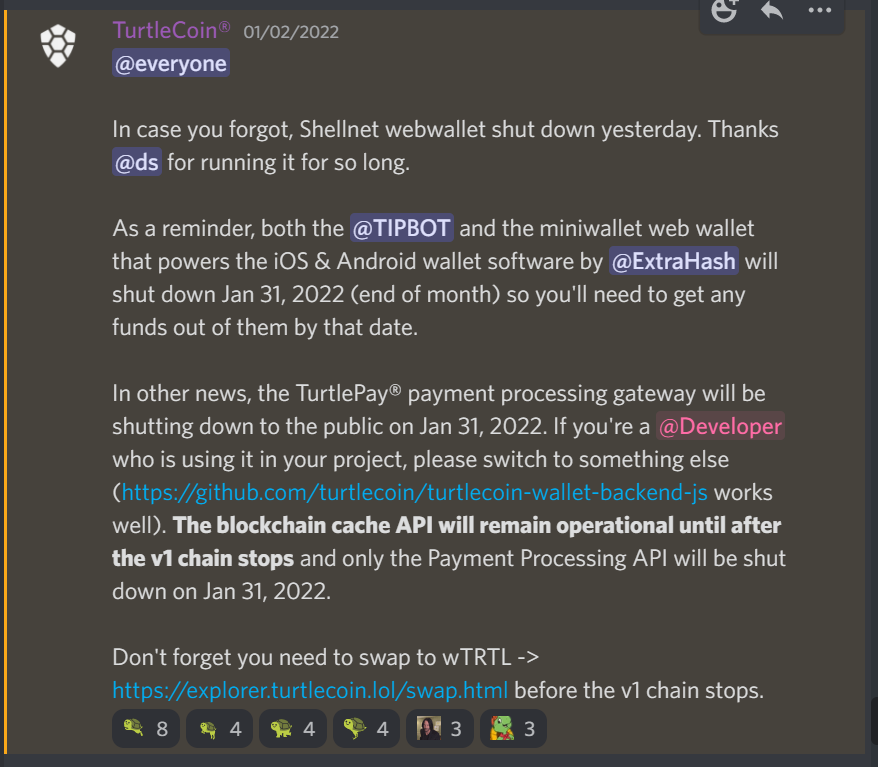 After Jan 31st, 2022 came and went, all was quiet and well in the world. However, a few weeks/months later and to our surprise, we started to receive reports that users were still using the applications/service. At this point, multiple community members made multiple attempts to reach out to ExtraHash to have him shut down the service, remove the applications from the app stores, and provide a method for users to contact him so that he might return their funds.

This was the only course of action that we, the community and remaining core team, could take as we did not operate the service, have access to the funds, or have any means of shutting down the service or removing the applications from the stores ourselves.

As a reminder, ExtraHash had not been a core dev and had moved on from the project long ago.

The community tried to reach ExtraHash through multiple channels of communcation including relaying messages through others that indicated they were still in contact with him. Through those intermediate parties, we were told that the service(s) were shut down a while ago and ExtraHash forgot to remove the applications from the app stores until reminded about them. We have been told through those third parties that he is working to correct that and get them pulled (if not completed already).

Other than the messages relayed through third-parties, we have had no direct contact with ExtraHash.

We’d love to be able to provide affected users a method to reach out to ExtraHash; however, we do not have a means for contacting him ourselves. There are multiple community members trying to reach out to him to find out how users can get their funds out of his now defunct service and we understand how stressful it is for the users affected.

We’ve done everything we can to help those affected; unfortunately, there is nothing else that we, the core team, can do regarding this third-party service.

If you, or anyone you know, has a method of contacting ExtraHash, we encourage you to let him know that there are turtles trying to reach him about his car’s extended warranty.

However, we have to make this abundantly clear, we have never supported/condoned the doxxing of anyone and that stance has not, will not, nor ever will change. Attempts to share the identity, or otherwise, doxx anyone (except yourself, you brave soul) in official communication channels (Discord, Matrix, Reddit, etc.) will result in swift, decisivise, and harsh (ie. ban) punishment.

You have been warned.

Now you know what we know. That’s all we’ve got. We have no further information, can provide no further guidance, and we have no way of helping affected users get access to the funds than we’ve already tried.

The service, the applications, the delayed shutdown and removal of those things was never within the core team’s purview and/or responsibility. We’ve always warned every TurtleCoin user that the safest way to store your crypto is when you, and you alone, have access to your keys. Say it with us now, not your keys, not your funds.

This post is our final communication on this issue as we cannot provide support, remediation, or advice concerning a set of services/applications that we did not operate or maintain.